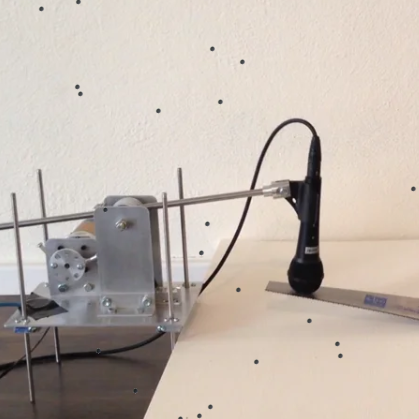 When I read the Heretofore Unheard Histories of Air Disturbances essay by Christof Migone, I felt inspired by his brilliant penmanship, oscillating between erudite and poetic, and I sent him eight questions—questions, which at times turned out to be more of an observation or proposition—and asked him to not dismiss the latter by saying “where’s the question?” Number five remained unanswered.

I
Wordless came to my mind, a piece by Yannis Kyriakides utilizing recordings from an oral history archive with the words themselves cut out. Is excluding the word with its meaning an answer or prospect for sound poetry or voice-related sound art? Does “The Word today serve no one except to say to the grocer: give me a pound of lentils”? (Henri Chopin: “The human sound does not explain, it transmits emotions, it suggests exchanges, affective communications; it does not state precisely, it is precise”). Is it the way of the pregnant pause, the unword, the sound of a language one doesn’t know?

“One doesn’t know” still presumes there’s something to know, but is somehow not accessible, just not quite yet. There might be modes of communication where the transmission of knowledge is not crucial, or at least definitely not the end goal. That being said, this shouldn’t be viewed as somehow aligning with an anti-intellectual stance, it is just an attempt to foreground an awareness of the reductive tendencies of some uses of language—principally those that purport that the sole purpose of language is to communicate. I did a piece that was very similar to Wordless in the early 1990s using an interview I did with an engineer from Hydro Québec. The idea came to mind after the fact, he had a particularly dry sounding cough and given that he was talking about the mega hydroelectric projects in northern Québec like the dams of the James Bay Project (which equal the size of the entire state of New York), it seemed appropriate to only hear his coughs and the other mouth noises he produced in-between words.

II
“The body is a sound factory” (Henri Chopin), “the digestive tract is probably the most musical, a sort of miniature band” (Peter Ostwald). Could it be a source of solitary, inner, outside-less musical experience for the ego? Involuntary-voluntary, solipsistic, “There is no silence. Your mind makes noise” (Bruce Nauman) musica humana?

The oscillation between involuntary and voluntary is a recurring undercurrent in my work. Certainly our bodies are replete with involuntary functions and we wouldn’t be alive without them. Conversely if we had only them we would have to radically redefine what aliveness constitutes, or at least our notion of the individual. Music assumes a certain organization of sounds, that is presumed to come from the producer but it can just as well come from the listener. In other words, sounds beyond our control can be organized in our heads, as we hear them we notice rhythmic and melodic properties that may contain patterns. But are the patterns part of the sound or merely organizational structures that our ears add on to the sounds? I like to dwell on the philosophical dimensions of such line of thinking without necessarily resolving the question. I find the oscillations that can be created by keeping both (or all) positions active in the mix to be generative. That is, to resist the obligation to move forward through a dichotomous process. The imposition of definitional assertions and therefore clarity only masks the opacity and obscurity that remains there, no matter what rhetorical sleights are expounded.

III
Body music as social or psychological liberation, as compared to extended vocal techniques being regarded as referencing madness (Eight Songs for a Mad King), disorder, or at least emotional incontinence, but on the other hand subsequently liberated from connotations as pure free expression.

No such thing as “pure;” there’s always a taint, a trace of something else, a heterogeneity in the seemingly absolute. (The attentive reader will notice that I used the word “always” in the preceding sentence, which seemingly undermines my point—but I would contend that it does not for it merely pokes holes at the notion of “purity” and does so consistently). My first CD, Hole in the Head, included a lot of pieces based on the Écrits Bruts book edited by Michel Thévoz, who at the time was the director of the Collection de l’Art Brut in Lausanne, Switzerland. The Collection was started by Jean Dubuffet. The writings by the so-called “insane” greatly inspired me for their sonic potential and the way sense and nonsense were imbricated—seamlessly at times, and jaggedly at others.

IV
“The human voice and musical expressions based thereon have unique capabilities of emotional contagion. For example, the capabilities that singing has in this respect are much higher than the possibilities of instrumental music, which derives from the fact that physiological changes characteristic for particular kinds of emotion—e.g. breath rate when experiencing fear—are more closely connected with changes in parameters of voice emission” (Piotr Przybysz).

Does it relate to non-vocal body sounds as well? Can they be processed during composition (for example electronically) but still retain these qualities, as the voice can to a considerable extent?

Would that be a way to humanize music or sound art, to involve the music in manhood?

I would not agree with Przybysz’s assertion. I don’t think there’s a need to privilege the voice over other forms of sound production by way of appealing to the physiology involved in producing sound through voice. Playing an instrument with your hands can tap into the same symbiosis. Furthermore, although I think the term “emotional contagion” is interesting, and I can imagine it being used productively, to use it as a hinge to privilege certain types of sounds, certain sources of this sound production, and certain attribution of humanity to these sounds, does not seem particularly useful. All sounds can be processed, either at the same time as they are being produced and recorded, or after the fact (most often it’s the latter). The processing stage will necessarily alter the sounds, from imperceptible tweaks to drastic transformations. So that could be said to be a qualitative shift, but whether the original qualities can be retained does not really interest me. As with my discussion on “purity” above, I don’t perceive the “original” as needing anything “retained.” That being said, context is always key. Especially in instances when the source does not belong to you, which is heightened even further when there are cross-cultural sensibilities to factor in and keep in mind.

V
Presbycusis or hearing loss causes the unstimulated hearing to generate noise or tinnitus at frequencies no longer perceived. Would you think of it as self-inflicted music or sound art filling the void, supplementing or co-composing whatever one listens to—in a timeless, static manner?

VI
On one hand sound art seems to incline towards a notion of an integrated, entangled aural experience, including music being played, acoustic conditions, incidental sounds, aural presence of our bodies, psychoacoustic hearing signatures, as well as individual analytic apparatus and imaginary or hallucinatory sounds. “The body […] leaks; the purity of sound is always disrupted” (Chris Kennedy).

On the other hand, research shows that each of the “layers” affecting the perceived sound has distinct coloration, and we are quite good in recognizing and categorizing these signatures.

“A multi-stage adaptation in which we appear to separate: the timbral contribution of the loudspeaker, the timbral contribution of the room, the inherent timbre of the program. A multiple-comparison presentation technique apparently allows listeners to identify and ‘stream’ these different timbral components of the total sound field. It seems like a form of ‘Auditory Scene Analysis’ (Bregman)” (Floyd Toole).

But don’t both “hands” meet? What I mean is that “streaming” could be said to imply an “integrated, entangled” aural experience. Each layer or stream is distinct in some way but cannot ultimately be isolated, it works in tandem with the other layers, streams.

There is a hybrid being that is temporarily constituted when interacting with a device. Human-machine interfacing. I have been playing gutted reel-to-reel machines as part of my Fingering project for over 20 years now, and I keep discovering new ways to engage with the instrument and each time I engage with it new sounds emerge from it. Even though on the surface it offers limited sonic possibilities, this relatively narrow starting point enables me to plunge into micro-differences that inhabit the interplay between my hands, the contact microphones I use, and the machine I am manipulating (and which is manipulating me, if we agree that it has a certain agency).

VIII
Does body sound art involve disturbing, painful physicality, reaching Chris Burden’s shoot-through arm and beyond? Are Crackers bad for your joints? The doctors seem to disagree on this.

Cracking one’s bones is not supposed to be a harmful activity according to the medical literature I’ve read. From personal experience, sometimes cracking your neck can worsen a stiffness rather than alleviate a kink. But most of the times, my constant cracking provides me with much needed relief. And other crackers seem to share the same sentiment. It would make sense that in the sub-genre of body-sound art pain would arise at times—be it voluntarily or involuntarily. At the moment, I can’t think of any works by any artist that have explored pain for the specific purpose of generating sound. I would be curious to hear about them.


Corporeality / China. The middle (of the) Sound