In a way I learn to compose again and again when starting a new piece. I has never been sure, whether the experience, which I reached during the work on my last piece, would work in a following one. My only assurance is my intuition, my only method is a use of open ears in deep concentration. I check my work this way many times during writing as well as later, from certain distance. Anyway, I have some experience and it is pleasure to share it with anyone, who could be interested. My use of quarter-tones and other microintervals has no theoretical basis. However I grew up in Prague, I am in no way a follower of H?ba, who intended to get in life all the microintervals, which he obtained by cuting half-tones of tempered scale into halfs or smaller portions. I prefere the use of microintervals, which is firmly connected with concrete aural experience. My main tool is a pair of ears. Using them I found out, that many of the destining musical fascinations of my youth were caused by either unintended or unreflected microinterval distortions. The former originated e.g. in badly tuned pianos and their wonderfull interferences, the letter has been audible in blues, jazz, authentic folk music recordings etc.. In the band jazz of the 1920s man can hear all the wind instruments permanently crying and screaming ? almost no pitch in tune is audible, most of the tones are attacked first out of tune (usually lower) and than gradually tuned up by drown-out glissandi. So do the singers of blues, spirituals and gospels, who?s melodies use mainly the tones of accompanying harmony; all the thirds, fifths and sevenths of the chord are first undertuned and then gradually tuned up, while sometimes this tuning up is even unfinished. Such distuned thirds and fifths of the chord, no matter if in melodic or harmonic form, exist also in folk music of many regions. In Central Europe it concerns especially old recordings of village musicians in the mountains, this time without glissanding to pitch ?in tune?. The bands of this kind were able e.g. to accompany a song with a triad, which was (through the whole song constantly!) nor major neither minor, because it?s third was intoned somewhere inbetween. I believe that there is an unusual emotional potency in the described natural use of microtones. I feel a special expression of pain, bitterness, longing, tears etc. in it. Another aspect of the matter is, that our ears, being used to diatonic and chromatic scale, tend to feel a need of tuning the microtonal intervals up or down to ?normal? intervals; this implies a kind of tention comparable to the leading tones in classical harmony. This way I used microtones mainly during last period of my work, approximately since 1998. At that time, after a period of concentration to sonoristic quality of music (cca 1989-97) I turned attention to elements of musical structure such as melody and built-on-thirds chords, with a hope that there exists a way to find again an authentic potential in this ?water-worn stones?. In 8 pieces for guitar quartet (1998) I tried to start from zero, to create my personal re-definition of basic musical elements. Focusing few simple elements, the manner which I admired so much in works of composers such as Morton Feldman and Giacinto Scelsi, I exposed e.g. a melody based on one minor third. This interval was undertuned? a ?-tone (however, with respect to the instrument?s technic, written as a major second, tuned a ?-tone up) confrontated with the two neighbouring chromatic intervals. Using a similar way of composition I wrote a kind of variations on a single minor or major triad. One after another I exposed it?s alterations, created by retuning its? tones a quarter-tone up and down (No. III of a choir piece after Thoreau Walden, theDistiller of Celestial Dews ?2000–) or? 1-2 sixth-tones up and down (No. V?of a quintet Lieder ohne Worte ?1999–). It was surprising how big number of alterations such a simple manipulation bears. The choose and order of exposing the alterations was determined? to a purpose of crying and painful expression. In the orchestra piece Remix, Redream, Reflight?(2000) I allowed myself such old-fasioned romantic tool as a big espressivo unison of symphonic strings. This modal melody works with ?-tones in the mentioned way of quasi leading tones.

My concern with sonority in the 1990s had roots in concrete aural experience, too. Many of the sounds, which I used in instrumental music,? imitated environmental sounds, either non-musical (boat horns, car horns, train horns, ?chant? of railway breaks, birds, insects?) or musical (street musicians, brass bands, jazz etc.). I was interested in their own musical quality as well as their ability to recall pictures or memories. These pictures of sounding reality implied naturally use of microtones.

The vehicle horns often play certain interval or triad out of tune, as it appeared in my meditation about Prague Rain, a window, roofs, chimneys, pigeons and so on? and railway-bridges, too (1992), in which I tried to share with the listeners my over-sensitive relation to various places in my hometown and to record the town?s poetry, that has been passing out during a rush modernisation in the 1990s. Among many examples this is the most spectacular: a huge train horn was imitated by low brass instruments, playing loudly in relatively high register a ?neutral? triad (with a third just between minor and major) and with the fifth slightly retuned up (cca 1/6-tone). A valey-like acoustic was evoked by a reverberation of opened strings of two grand pianos. This ?sound? photo? was then manipulated in various ways: exposed again and again and so focused hypnotically; at the same time varied by bending them a ?-tone down; and enriched by contrasts of instrumentation and dynamics. With use of musical means the sound imitation of environment was absorbed and adapted to a more abstract musical situation. For years I had been fascinated by sound of the suburban shunting yard, which I used to pass during late night walks. One day I decided to record it with a dictaphone, to analyze it with my ears at piano and to transcribe it for harmonics of violins, crotali played with a bow and picolli. This music appeared in my piece L?Orch pour l?orch (1990), not only to recall the fascinating? nocturnal still life, but to juxtapose it to other sound pictures such as ringing of numerous churches or tapping of stone-masons while repairing an old cathedral. The result, especially when more sound imitations played together, was strange, nor abstract music, nor concrete sound-imitation. In various pieces I brought a music about music, while imitating and distorting with microintervals excerpts of various well-known musical genres such as rock music played by beginners, hot jazz or marching band. I used numerous ways how to show the music as a recall, memory or message, starting with exposing a very short fragments (as if snapshots), or playing it together with some musical ?commentary?, or implanting? various rhytmic and intonation irregularities. Experimenting with brutal dis-tuning of triads and seventh chords (where each tone appeared at the same time in tune, micro-belowered and micro-sharpened) I found out a very special expression of bitter grotesque. My spontaneous reaction on such sounds (at a rehearsal for?Three pieces for retuned orchestra??1996)?comprised explotion of smile and dramatic shock at the same moment. Enticement of microintervals consists in a celestial beauty of certain forms of the interference. In the third movement of?Three pieces for retuned orchestra?(1996) I worked not only with the fact, that the interference of silent untuned unison of pairs of flutes or trumpets seemed to be wonderful, but that it also helped the pair to come out of a sound-mass, as if it were amplified. Another reason why I took up ?-tones was an intention to get a new, nonstandard sound. I took an advantage of the fact, that quarter-tone fingerings of winds usually change their sound-color to a special, less sonorous sound. I liked to combine it with extremes concerning range and dynamics. A neighbourhood of? ?-tones and 1/6-tones appeared in Lullaby (1997) for trombone, guitar and ensemble. The trombone did not sound like trombone, because it played far over normal range, guitar was retuned that far, that it?s natural harmonics did not sound like guitar ones. Both instruments played a balanced softest pianississimo, but there was exciting contrast between the extreme tention of high trombone notes and extreme lightness of guitar?s natural harmonics. Yet deeper, up to 1/8-tones, I went in Rubato (1996) for violin and piano. As well as in Lullaby, it was necessary to work with only few elements, slowly and pianissimo, to make such subtle nuances perceptible. Again my main reason was expression, this time as if soothing. To say the whole truth, from time to time I used to write some microtonal constelation, unknown to me, just because I was curious, how it would sound. I did it e.g. in the end of Flying Dog (1990/92). I believe, that it is a way, very usefull for sure, to make a step ahead out of limitations of own experience and imagination. 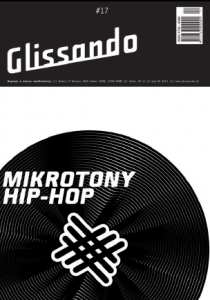