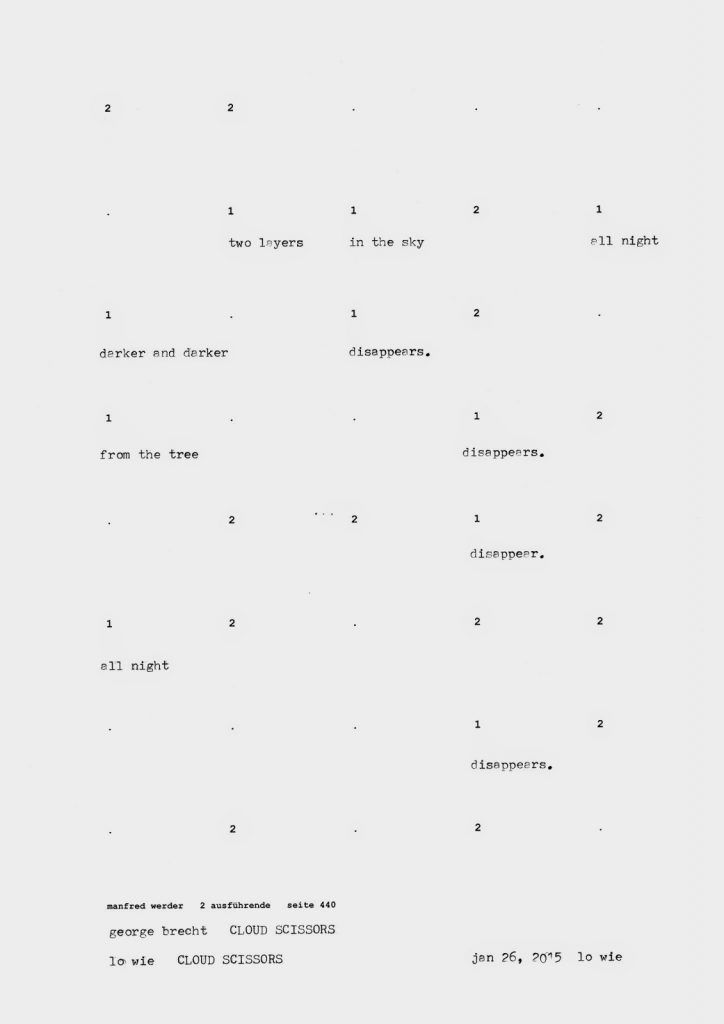 „Glissando” magazine invites authors to submit abstracts (up to 2000 characters) and if accepted – essays (up to 40,000 characters) for the upcoming #28 Glissando issue regarding broadly defined conceptual music.

One could think that conceptualism – both as a movement and artistic tendency – had never existed in contemporary music. There is no mention of this phenomenon in the vast literature on the history of the 20th and 21th century musical practices. Although conceptualism is primarily associated with the visual arts, let us not forget that its origins lie in music, e.g. in the musical experiments of John Cage and New School For Social Research, or Henry Flynt, who coined the term concept art.

The conceptual turn of the‘50s allows for the revision of the contemporary music canon when it comes to such artists as George Brecht, Takehisa Kosugi, Robert Ashley, Peter Ablinger, Manfred Werder, or Toshiya Tsunoda. The recent years have seen an increased interest in conceptualism as evidenced by the Darmstadt community (e.g. Harry Lehmann, Johannes Kreidler), artists influenced by John Cage (the Wandelweiser Group, the post-reductionist scene), or even techno and popular music. The Darmstadt community was discussed in Glissando #22 and #28 – it’s time to deal with the other ones.

In the upcoming Glissando #29 issue we will take a look at conceptualism understood as artistic experiments, which are no more limited to the creation of new forms or “material progress.”We will focus on the practices subverting the conventional model of musical work or artwork in general and thus going beyond the traditional domain of aesthetics. The purpose of these practices is to redefine ontological, epistemological, and ethical problems. We welcome essays on non-standard notation, intermedia compositions, and utopian music. We are interested in artists and compositions examining the status of a musical work and its perception as well as taking a critical look at music institutions and the commodification of contemporary culture.

Let’s explore the conceptual tendencies observable in clubs, concert halls, and other musical spaces. Let’s think about a conceptual song, symphony, and opera.