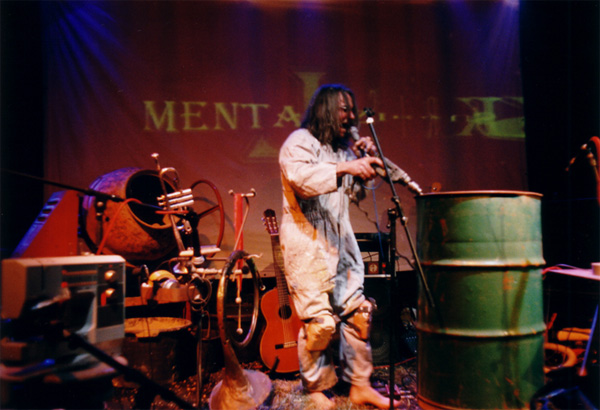 As much as many would doubtlessly disagree, I have always felt Kraków to be quite a healthy place for both underground music and, indeed, its musicians to thrive. Like most cities, there are of course little cliques in operation, but those involved in the areas of music I’m mostly interested in have always appeared very open towards artists wanting to collaborate with them in any capacity. I certainly wouldn’t call myself a musician, but I am directly involved via my various activities, including my being in the group Theme, and in turn never once experienced any problems with proposals to work with people very much part of the local improv scene. The likes of Michał  Dymny, Tomek Chołoniewski, Philip Palmer and others have all willingly collaborated live at concerts I’ve helped organise by Theme, Hannis Brown and Jean-Hervé Péron and Zsolt Sőrés. They’ve also helped organise concerts and have consistently proved themselves warm to all proposals and possibilities. This naturally makes for a perfect setting for artists coming from the perspective of so-called difficult music, as Kraków’s own microcosmic collective of improvisers all arrive from different backgrounds and together add up to a creative whole never afraid to break out of their own comfort zones and challenge themselves (or the listener). Open-mindedness courses through these musicians, which is always refreshing. Jean-Hervé Péron during the concert of Art-Errorist. Source: http://julietippex.com/roster/art-errorist/

In this respect, I’ll never forget the time DM&P Trio’s Philip Palmer rose to the challenge of playing some sax whilst standing in an oil drum at Klub Re during a Jean-Hervé Péron/Art-Errorist show. This, for me, encapsulated everything about this tiny community of musicians. At once absurd, striking and powerful, it demonstrated only too clearly how wide any one of these artists might be prepared to cast their net. Although confounded himself by these actions, here is what Philip had to say about this: „I was a guest due to appear in the second set, so wasn’t really expecting it when Jean-Hervé Péron came over with a guitar and told me to learn some quite complex ballad by ear – just before the concert started. He purposefully slipped it into the set after an extended episode with a chainsaw. So it was almost impossible to remember the bloody thing. But somehow I managed it. I suspect that he was purposefully winding me up to get some kind of reaction. When I got on the stage, there was a false start, because he had forgotten his own ballad. Which made me even more mad. I was also standing in an oil drum full of woodchips, which didn’t help. When we finally started correctly, I was supposed to let him sing for two choruses and then play more aggressively. But I was so pissed off that I destroyed his ballad after about a chorus. I don’t think he was happy, because when I later saw him packing his gear in the van, he turned to me with a wild-eyed expression and told me that I had really fucked up his song. To this day, I don’t know if he was seriously angry or just pretending. Of course the audience thought the whole thing was part of the act. And in a way it was.”

There are others doing musically different things here in Kraków as well, of course, and I’ve also had some good experiences with some of them as well, but it’s those artists operating in the improv or purported difficult music scene I’ve grown to know more personally and who, in turn, play music I’m largely more interested in. They were themselves initially introduced to me by Marcin Barski, who was co-running AudioTong with Łukasz Szałankiewicz (a.k.a. Zenial) at the time when I first landed myself in the wonderful city of Kraków. Through him, and allowing myself the opportunity to part a Red Sea-sized alcohol fug in order to trip down several flights to the ravaged basement that is my memory these days, I was shown Michał  Dymny’s Open Sessions at Święta Krowa and Rafał Mazur’s presentations at the Solvay Centre. Both these venues themselves seemed as likely or as unlikely a place to be hosting such concerts, anyway, yet likewise between them embodied everything sublimely. From the faux-bohemian and smoky confines of the Święta Krowa basement to the austere and comparatively more cavernous Solvay. Kraków’s improv musicians had two firm bases from which to freely express themselves in. This contrast alone said much about these artists, if not about their music. I wouldn’t dare to claim I’m an expert on anything, never mind Kraków’s still chugging improv music circuit, but almost every concert attended has felt like I mainlined something lava-like. Just like anything great, or at least attempting to be, well should.

The UK by comparison was a completely different experience for me. Although I lived close enough to London for it to be my kind of a lifeline as far as live music was concerned, there was little happening in or around my hometown of Herne Bay. There was so little happening in fact that certain friends of mine and I had to, quite simply, make things happen ourselves. Growing up with punk, however, instilled this DIY sensibility in us anyway. This is why the Kraków improv circuit especially resonated with me. Despite the individual artists arriving from contrasting music backgrounds themselves (from academic right the way through to those clearly not trained at all and simply compelled to express themselves), they all appear to have been driven by that same sensibility I likewise saw in punk. Of course, this sensibility has driven free jazz and all manner of other untamed and let’s say, for want of a better word, pure or undiluted music forms, too, but I was never directly involved in those and can only comment from personal experience. To do otherwise would be tantamount to the kind of dishonesty I see rife in music, or those commentating on it. Which neatly brings me back onto these musicians in the first instance. There’s a bare-faced honesty to their work, whether in the now sadly defunct DM&P’s almost Pollock-like assault in sonic form, Dymny’s own six-string shredding, Konrad Gęca’s mashing-up of field recordings and electronics or Sympli Romatikó’s own perhaps taking of the mantle once reserved for DM&P and blending it with performance art and a sometimes krautrock-ish trip backwards through a black hole.

I have never once thought a musician should have any kind of obligation to broaden the horizons of the listener, or whatever. It’s always been a two-way deal in this respect. All artists of true merit ought to be ultimately out to satisfy themselves, and if they fail at that I’d contend they shouldn’t then expect anybody else to be pleased, either. To that end, having one’s horizons broadened or not is surely the sole concern of the individual listener. More personally, I’d actually say that all music, whether good or bad, has broadened my horizons, irrespective of any given musician’s own intent. What I see amongst Kraków’s improv musicians cuts deeply with me precisely because it is personally driven yet simultaneously expressive enough to resonate beyond. If it appears somehow insular, then fair enough, but that’s not what I derive from it. These musicians seem very open to new possibilities, as already noted. If what they do in any capacity looks uninviting or seems difficult, then this fault rests with those from outside and not with the artists themselves. No matter how things might appear, the music (and it is music and not the impenetrable din or racket so many would attempt to claim it as being) is ultimately worth totally and utterly immersing yourself in. Like all improvised music, of course, nothing is guaranteed, but the worlds evoked by Dymny, Chołoniewski, Owczarek, Kolokol, Gęca, Chikmakov and their many colleagues and (international) collaborators is propelled by an all-encompassing tension impossible not to get snagged on.

Kraków’s improv community, such that it is, is comprised of some very unique individuals who, again, arrive from all manner of different backgrounds musically and otherwise. What makes it work is precisely this. The fact they all accept each other in an environment that might well, at a glance, seem singularly minded and motivated by a similar vision during any one performance involving any of them pays testament to them on many levels. I’d contend that all the best groups have worked exactly the same way in this respect, regardless of the chosen methods or medium. There’s an incredible chemistry at work here and it can equally be wonderful to witness this whenever the chance allows. Since those early regular concerts at Święta Krowa and the Solvay Centre, some things have changed, including the fact I can no longer get to as many performances as I’d like to due to countless other commitments in my life, but most of these musicians are still playing often or organising concerts in and around the city. The very fact they’re still hard at it and have total disregard for popularity and other such concomitant notions likewise serves them well. I might not personally get to see them so often these days, but I know that I’m in for something completely exhilarating when I do get the chance. That fucking works for me.

Global and Local: An Observation from the Neighborhood