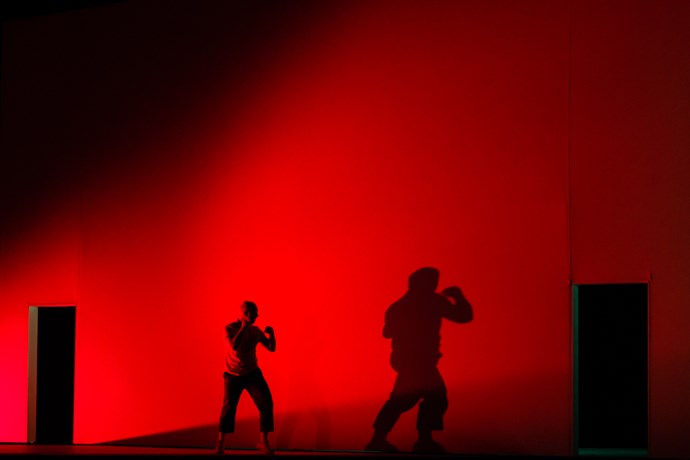 This opera was written out of youthful anger. And maybe even perversity as well, for Mark-Anthony Turnage did not at all want to write it. For his entire life, he has always tried to do something other than what everyone has expected of him. As a child, he was an unruly pupil and got bad grades in school even in music. During his studies at the Royal College of Music, he decided to tie his future career to commercial art. It is not out of the question that his fortunes would have taken a completely different turn, had he not won a scholarship in 1983 to study with Gunther Schuller and Hans Werner Henze in Tanglewood. At the time, he was writing instrumental works, light and transparent in form, often inspired by jazz and funk music. Henze appreciated their latent theatricality and proposed to Turnage that he compose an opera. Turnage refused, explaining himself with an organic disdain for the reactionary character of this bourgeois art. Henze, the author of the operas Boulevard Solitude and We Come to the River, which had scored glittering triumphs on international stages, laughed up his sleeve and reminded his student that he himself was a Marxist. As a basis for the libretto of Turnage’s future composition, he proposed a play entitled The Pope’s Wedding by Edward Bond, a luminary of the British theater of cruelty.

Unfortunately – or fortunately – Bond did not reply to the young composer’s letter. The next choice fell to Steven Berkoff, an English actor and playwright, the author of a play entitled Greek – a perverse travesty of the Oedipus myth, maintained in the in-yer-face theatre tradition. Its protagonist, a certain Eddy, is growing up in a London hole in Tufnell Park, in the gloomy realities of the 1970s recession. When his parents tell him of a visit to a fortuneteller who has predicted that Eddy will kill his father and go to bed with his own mother, the boy rebels and runs away from home. Time passes, the country falls into decline, filled with the cancer of violence, strikes and overwhelming decay. Eddy, pursued by policemen dispersing a demonstration, finds shelter in a greasy spoon, where he gets in an argument with a waitress. The manager of the joint intervenes and, in the ensuing scuffle, ends up dying at the hand of the young intruder. The waitress turns out to be his wife. Despite the circumstances, she falls in love with Eddy: perhaps because the boy reminds her of her son Tony, who had gone missing in a pleasure boat disaster on the Thames. The truth comes out ten years later during Eddy’s parents’ visit to the happy couple. Tony and Eddy are the same person. The adopted parents had fished the boy out of the river and impulsively concealed the circumstances of the event. The matter ends somewhat differently than in Sophocles, but more about that in a moment.

Alex Otterburn and Andrew Shore in the opera “Greek” during the Edinburgh International Festival in 2017, Scottish Opera. Photo: Jane Hobson

The opera Greek premièred in 1988 at the Munich Biennale. A month later, the work created a real sensation at the Edinburgh Festival – somewhat contrary to the intentions of the artists, including stage director and libretto co-author Jonathan Moore, who had hoped to evoke a scandal on the scale of The Rite of Spring. Meanwhile, the matter ended with over ten minutes of standing ovations in a theater packed to the gills. Greek had arrived at the right time. Margaret Thatcher’s radical reforms had torn at the social fabric of the United Kingdom, dividing the country into enclaves of wealth and regions of true poverty, and resulting in a gigantic increase in unemployment that has never since fallen to pre-recession levels. Eddy became a figure of the contemporary Everyman; and the plagues besetting his country, a metaphor for the disintegration of the previous world order.

Much of the credit for this goes to the music itself, which in formal terms maneuvers between chamber opera, English musical and traditional folk vaudeville. The juggling of linguistic registers – from crude, vulgar Cockney to sublime phrases taken, as it were, straight from Shakespeare – is fully reflected in the score. Lyrical fragments loaded with eroticism flow in free bel canto phrases; aggression and violence culminate in ear-splitting brass parts and brutal interventions of the percussion. At the moments when Turnage breaks the narrative up with irony, both styles degenerate into pastiche. Among the characters, only Eddy maintains a uniform identity; the remaining vocalists play triple or even quadruple roles, deepening the protagonist’s disorientation. The singers speak, melorecite, vocalize, shout and scream, carrying on a constant play with color and convention.

I had known this work only from recordings and been very curious how it would be received nearly 30 years later, this time on the wave of populism sweeping over Europe. The new Scottish Opera staging, which will appear in Glasgow only in February of next year, received a peculiar pre-première at the Edinburgh Festival. The staging’s creators – stage director Joe Hill-Gibbins, stage designer Johannes Schütz and costume designer Alex Lowde – decided to place the entire narrative in parentheses, directing the four singer-actors against the background of a revolving wall equipped with two doors, and substituting all props with real-time projections onto the wall. I bridled a bit at the sight of tabloid headlines with direct references to Brexit, and froze when live maggots appeared in the sea of ketchup displayed on the wall, evoking inevitable associations with Rodrigo García’s Golgota Picnic. I overcame my impulse to rebel and began to observe the projections more attentively. At a certain moment, I realized that the stage director duplicates the composer’s distanced treatment of the narrative. The tomato sauce is not real blood. The point here is neither real murder, nor real incest. Greek is an excruciating tale of people forced into roles imposed on them from above, of the impossibility of overcoming fate, of the defeat of free will in a world ruled by those with more stupidity and more power. Alex Otterburn as Eddy in the opera “Greek” during the Edinburgh International Festival in 2017, Scottish Opera. Photo: Jane Hobson

We hear this in the waitress’ wonderful aria after her husband has been killed, which is clothed by Turnage in the form of the absurd lament of a woman mourning a man who will never again come home all plastered and vomit on the pillow, a plaint so beautiful in terms of sound that it could equal Dido’s lament from Purcell. We see it in the costume design concept, which reflects Eddy’s social advancement over the course of a dozen or so years in a change from a cheap football fan’s sweat suit to a luxury sweat suit, better cut and in a more elegant shade of red. We can feel all of this in the way the space is played out by the stage designer, who suggests the passage of time with revolutions of the empty, frightfully bare wall, which moves so fast in the finale of Act II that it is as if the surrounding world has gone insane.

Berkoff finished his play with ecstatic praise for the love that conquers all. Turnage was not convinced by that finale even 30 years ago. His Eddy wants to carve his eyes out in ‘Greek style’; then he wavers and throws a fearful question addressed to Oedipus from Sophocles’ tragedy out into space, unable to believe that one could do such harm to oneself; finally, he emerges from the abyss of despair, drawing out his monologue about the power of feelings – oddly uncertain, however: half-sung, half-spoken, against a background of fading single-instrument tremolandi in the orchestra. Eddy of Tufnell Park has no free will. He cannot even blind himself. He is a helpless puppet who prefers to pour ketchup in his eyes rather than stand face-to-face with the moral decay of the contemporary world.

The unquestionable hero of the production turned out to be Alex Otterburn (Eddy), a young singer gifted with a gorgeously colored and technically flawless baritone, a superb actor, compared to previous performers of this role considerably more delicate and human in the role of a contemporary Oedipus who has no influence on his own fate or on that of his loved ones. In vocal terms, he was fully equaled by Allison Cook in the quadruple mezzo-soprano role of the Wife, Doreen, First Waitress and Second Sphinx. Both Susan Bullock in three soprano roles and Andrew Shore in three baritone roles – most convincing as Eddy’s tragic adopted parents – were in a class by themselves. Stuart Stratford, director of the Scottish Opera, led his chamber orchestra in a manner that had seduced me already two years ago on the occasion of their première of Jenůfa – logically and precisely, but at the same time with a passion that permitted a certain angularity and apparent ‘ugliness’ of sound, in this context completely justified.

While the Edinburgh theater was not packed to the gills, even so the show ended with a standing ovation. The critics announced a few days later that thanks to the staging of Turnage’s opera, the Festival had again risen to heights the likes of which we had not had the opportunity to experience in several seasons. It is characteristic that the opera, written out of youthful anger, continues to awaken unbridled anger in the audience. Characteristic and sad that older people have seen in it a truly Tiresian prophecy of Brexit.

We got the presence, but where is the essence?* – Unsound Cracow 2018 essay