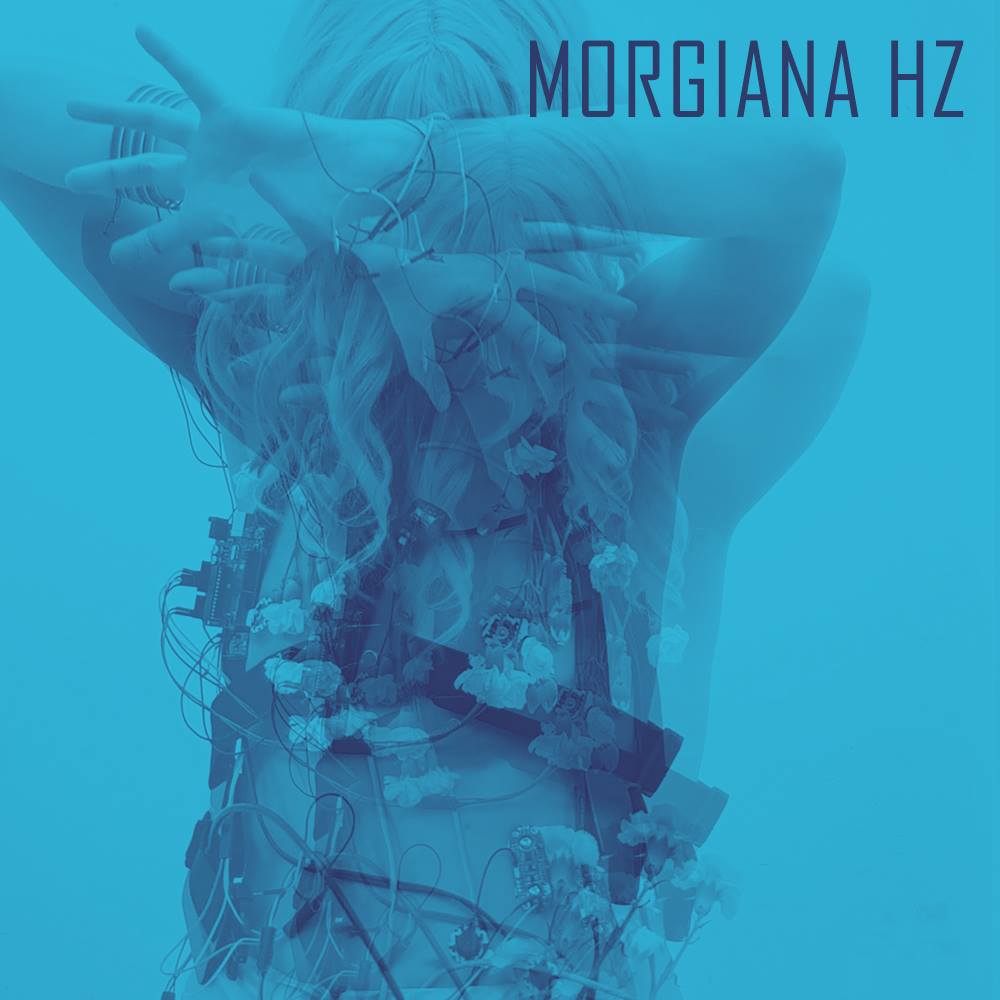 Music is a part of me, I breathe music, it’s been an integral part of my life since I was a kid. I organized my first rave, which took place in a forest by a nearby lake, with a group of friends when I was just a teenger. A bit of time has passed before I started playing. Since I was a child, I was very sensitive not just to music, but also the sounds that surrounded me. Parents would play me children’s stories on vinyls – I remember how excited I was about the magical machinery of the record player, the joy of using it, the physical act of turning over records. I felt a spark right then and I think that’s what shaped my hybrid, constellation-like sets.

I am always adding to my instrumentarium and searching for new ways of expressing myself. During last year’s HackLab – a musical laboratory during the CTM festival – me and my awesome group[1] worked on using artificial intelligence in music. We mutated our voices using machine learning and created a non-binary personality which entered into a real-time dialog with us.

It’s clear that this time around I’m producing sounds: by dancing and conducting a laptop orchestra woven together with neural networks, I send and receive impulses through special sensors. I really enjoy working with them. I used them in an audio-visual sensory experiment at the CONTEXTS International Festival of Ephemeral Art where, together with Bartłomiej Chmara and Kinga Maługa, we created a space made up of sound and light whose tissue was woven live, in part thanks to other people’s interference.

I work with ℌEXOℜℭℑSMOS, a Mexican sound artist. Together we explore our respective heritages, the power of crystals and intentions, wizardry combined with hard science. During our long Berlin sessions, which sometimes take entire days, we create sounds using machines, but also junk/not-junk that we find on the streets. But the most interesting thing is the special system that, thanks to machine learning, generates sounds based on plants. Their intensity and timbre depend on everything – the time of the day, the light, the energy input, the water level, and all the intentions we feed to the plants. It’s incredible, but aloe plants make beats! Very organic and juicy ones.

I recently “learned” binaural recording from FIS and spatial composition from Pyur. I had a little affair with creating sounds through live coding. I did the music for the Excrescence – Body Extension Open Source VR installation which was presented at Teatr Powszechny in Warsaw. It was a part of a two-day premiere where, to welcome the new digs of the Dream Adoption Society, I played two nearly five-hour long sets – the first one was made up of my own compositions only, in the second one I used other people’s music. I also started doing performance art during my shows. Last year, during the Oczy Przywykłe do Zmroku Nasłuchują Zmian (Eyes Used to the Dark are Listening for Changes) event in Cracow, I debuted my quadrophonic composition. Then I played fleshy flower, my 90-minute, deeply personal, shamanic spectacle of a set, which draws from the cleansing power of the wilderness, at the wonderful Nyege Nyege festival in the Ugandan jungle. It’s a story about becoming yourself, looking for answers, and anchoring yourself in your being. It’s also about internal journeys, seeing the other side of difficult situations, and embodying the strength that soothes and pushes you forward, that doesn’t let you stop, lose yourself, or disappear. It’s subtle, but powerful. Wild like nature itself.

All my artistic endeavors – from music to performative installations – present stories rooted in the heart, which I believe can have a healing effect. It’s up to the person experiencing the piece whether they notice it and whether they become a witness or a participant who accepts the transformation. To me, reality is virtual. I allow the flow of infiniteenergy to move around and become personified through my body. I serve infinity, at balance with the source, with my own rhythm, destiny, and vision. I’m always full of questions – how can I give other beings more than just stories which are meant for your rational mind, which you can talk about? How to collectively experience that which is beyond words? How to embody knowledge? How to build a shared experience of sharing and knowing? How does the moment of connection feel? What is it made up of energetically? I really like the word togetherness, which I interpret as the miracle of practicing connection. I enjoy life’s juiciness in its sensual dimension. I just trust the things that come, I feed my passions. I imagine that my heart is connected to a cosmic antenna which catches invisible frequencies and other secret messages. I open my ears, I train myself to be mindful, I maintain a state of gratefulness and let energy flow through me and create what is best for me right here and right now. The paths of life lead me to wonderful people, who catalyze my hidden predispositions. Something that used to be hidden away, but has now come out.

I come from a small town and a family in which I had to put in a lot of work to be accepted. It’s funny that acceptance came as soon as I stopped fighting for it. The key is to achieve harmony inside – everything else will fall into place. The deeper I go inside myself, the more layers I strip off, the more answers I find. I find kundalini yoga and singing, or maybe just making sounds and breathing through all my body, the most helpful. These practices also increase my vibrations. I still have some fears, but I’m working through them and becoming stronger.

When I was preparing to perform fleshy flower, I did a three-week residency at the Nyege Tapes studio in Kampala, where I combined the knowledge of my Slavic ancestors and everything I know about energy with African heritage, awareness of the body, and vibrational alchemy. I also met Slikback there. He’s a Kenyan producer and DJ. Something clicked between us right away. We immediately started gravitating towards each other’s opposite musical poles and decided to work together. Back then we thought that we won’t meet again any time soon, so we would spend most of the day making music and showing each other the things that make us tick. Out of the synergy of my records and their computer transformations, which Freddy Njau once called “deconstructed nature”, out of the freeform structures, vocal geopoetry, and a database of samples of different instruments, as well as Slik’s heavy bass sound, which is a fusion of trap, grime, gqom, tribal, and all the other things going on in his head, we decided to create a duet. The name came naturally: ogniki. We’re debuting on Hakuna Kulala, Nyege Tapes’ sister label, soon. Right now we’re perfecting our live act. Slikback is on a three-month European tour. We played a three-hour hybrid together in Amsterdam, it was pure pleasure. People’s reactions were very lively – we’ve seen basically everything on the dancefloor, including twerking and moshing. And the adventure is just beginning!

I also recently started working with the artists from Teatr Powszechny’s Dream Adoption Society. We created a multi-person VR installation titled Excrescence – Body Extension Open Source, which is meant to explore the experience of group transformation of the pleasure impulse, touch, and community in all its different aspects. “The hybridization of shapes crawls beyond the borders of what we know; the skin creases and opens, it absorbs with its myriad openings and longs for extension. Allow our bodies to freely, unreservedly extend – let them bloom, divide into new parts, and feel!”. It’s an impulse to create a new, soft wave of sensations.

Definitely my residency in Africa, playing at a queer party in Kampala, at a university (the legendary one-minute set), playing three different Nyege Nyege sets in the jungle near the source of the Nile, showing my music to people brought up in a different culture, simple and honest conversations about music and the emotional load it carries. I understood that equipment doesn’t matter. That you can make totally fire tracks and performances with Virtual DJ loops (hats off to the Tanzanian Singeli scene, the Sisso crew, lovka). Bad equipment or limited access to hardware force you to be more creative. Arlen Dilsizian and Derek Debru, the founders of Nyege Tapes and Hakuna Kulala, the Nyege festival in Jinji, and the artistic villa in Kampala – a roof over your head, a studio and a space for residencies – are doing a fantastic job. They’re pushing forward despite the difficulties and they never, ever give up. It’s the most vibrating place on Earth; everything there is so full of life that you can feel it pulsating, the plants sing, and even the ugliest garden stones turn out to be crystals with the clearest vibrations on this planet. The villa’s motto, hakuna kulala, means “no sleep” in Swahili. Every bit of space is full of sound: Leo Palayeng Kenny’s electro achola, dark experiments from Zilli’s cave, Rey Sapiens’ Congolese techno hybrids, the shouts of Kampala’s best MCs: Swordman, Blaq Bandana and Ecko Bazz, or just rehearsals of local bands like the Nilotica Cultural Ensemble or Nihiloxica. The vibe is incredible. You can feel the desire to create, to work with all the artists around you, whether they’re rappers or dancers. Uganda taught me how to be persistent, keep a bright outlook at all times, enjoy life, and be a badass. Also, how to twerk.

2018 was hardcore, I experienced a lot of changes and learned a lot about acceptance. I thank myself for the fact that I can continue to believe and trust even when things get tough. A journey to the depths of the Berlin concrete, concrete without depth, without a heart or soul and then a union with nature in a mountain village, bathing in the moonlight, walking the Earth barefoot, dancing in the forest, bonfires, climbing, and an… environmental rave. Nature is my main teacher and source of inspiration. Listening to the quietest of voices – the call of the soul. Discovering and expressing myself – as an artist, not just a craftswoman of sound. I deal with vibrations and sound massage.

The nooks and crannies are the most interesting, and following yourself gives you a deeper sense of fulfilment. I feel and know that everything, even when it’s hard, happens for a reason. It’s a platitude when you hear it, but it stops being one when you feel it. Be yourself, a luminous being with an open heart. Intimacy opens and invites you to daily tenderness with the outside world. Intimacy is our space, and sharing it allows us to have honest contact with our surroundings. Your vibrations will lead you to where you want to be.