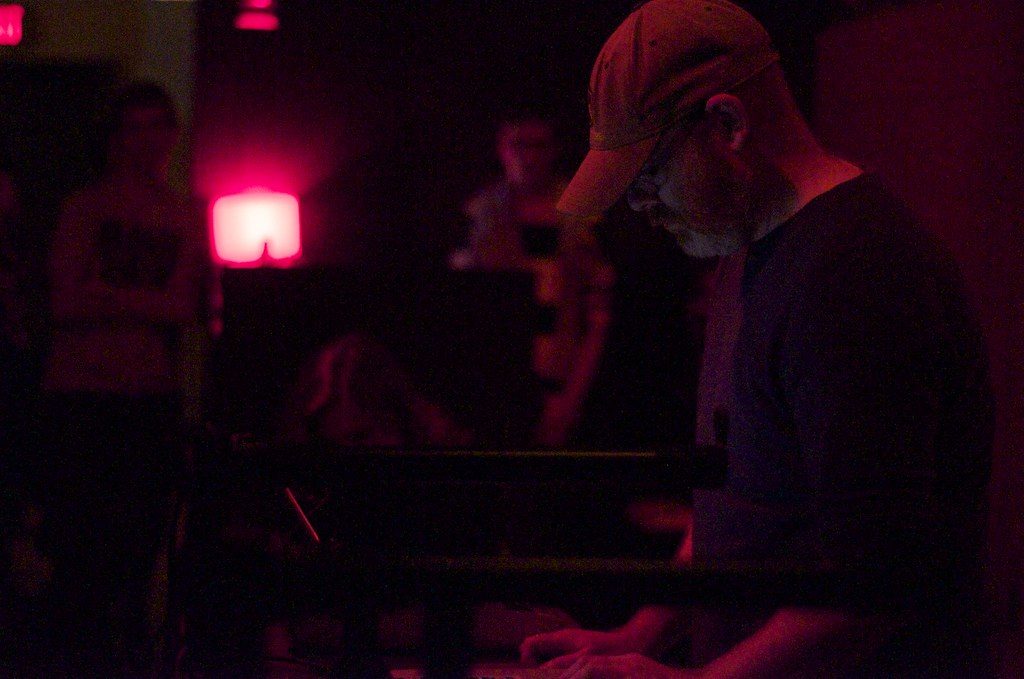 This is a revised English version of the interview conducted at the CTM.13 Festival.

Piotr Tkacz: Listening to your music, but also reading the notes accompanying the records and looking at your website, I get the feeling that humor plays an important role in your music. Not in the sense that you are telling jokes, but sometimes you kid around or use irony. Am I right about this? If yes, is that something you do consciously, is that an important part of your artistic practice?

Mark Fell: I guess it’s part of my personality, like basically I’m always having a laugh. Maybe it’s part of the culture I grew up in where most social interactions revolve around people taking the piss out of one another. Maybe there is an irony to the work I do, but for me it’s also totally serious.

That’s why your music is so interesting – it may contain both humor and seriousness. I get the sense of irony or even provocation from the following notes: “The project was written in transit during a house and studio move, and exclusively produced using the internal speakers on a MacBook Pro. Due to time constraints, the mastering session with Lupo at Dubplates and Mastering was unattended.” It stands against common expectations about artists’ professionalism and tendency towards high fidelity.

Yeh, I liked the idea to work against that notion of perfection, but ultimately I stated it because it was true. And mostly these days I listen to music off my computer so it seemed to make sense to make it that way. I did listen on headphones a few times however just to check the bass.

Is it because of your questioning of the concept of perfection that you often go back to your old pieces and rework them? In this sense, there is always something open-ended and incomplete about your compositions…

Yeah, I like to continually rework materials. It is because nothing is never fully exhausted. there are always other versions and ideas that could be made, new combinations of sounds, patterns and so on. But I think probably that’s the way most artists work.

I remember reading that you had plenty of versions of tracks on Multistability. I realize it might be hard to describe exactly what your criteria are, but perhaps you could tell us when you’re satisfied with a piece enough to decide it’s ready – even if you may change your mind later?

There’s a kind of curve to it. At first when you work the track gets better as it takes shape. Then at some point the more work you do simply makes the track worse. But it’s tempting to keep working all the time. So as soon as the track seems almost ok, it’s best to stop and move on.

How do you deal with the question of consistency? Some of your records sound really coherent and focused while others seem more varied and diverse.

I choose different types of sounds and approaches to sound construction for each album. You might describe the result of this as having more or less coherence or focus. I think most of my work could be described as sonically focused. Generally speaking, I’m after a specific kind of sound.

Could you tell us what kind of sound it is?

The sound depends on the project I am working on. Typically, people describe the sounds I use as clean, sharp, glassy, metallic.

Well, then, would you use those adjectives to describe your music. Do you even think about sounds in such categories?

I would not use those words. I prefer to use technical vocabulary to describe sounds. but I can’t think of any common physical features of the sounds I use.

What qualities or values do you look for in music? Either your own or someone else’s (if it makes any difference)?

I don’t really look for qualities or values. It’s not like there is a series of things or a checklist I have which I get out whenever I make or listen to music so that I can work out how much I like it. For me this assumption is a little unfortunate I think.

What you said is, in a way, consistent with what I think about your music: I consider it to be an independent, yet “pointless” whole, because there is nothing obvious to be “gained” from listening to it.

I remember my first encounter with your art. That was when your Attack on Silence exhibition was presented in Poznań. It was quite demanding, and the audience members seemed rather impatient and after some time started talking to one another and making noises with beer cans, etc. I felt that not only did you not care much about it, but you even enjoyed this kind of friction.

Yes, I don’t really mind the audience not paying attention. I mean if I present works that are quite boring then I guess I can’t blame the audience for feeling bored.

Why is boredom so interesting to you?

Boredom is an interesting state for me because it’s the opposite of what music is meant to make you feel. You become primarily aware of time and your own thoughts.

I see what you mean by “being aware of time.” It seems that you more often gain it through repetitions with minor variations rather than through longer durations, am I right?

Well, I think longer durations promote a different response. The way I use shorter durations sounds quite dynamic, I think. That is – non-boring, I mean. But it could be just as boring, I guess.

Is this way of working with sound somehow related to so-called club music?

With club music those repetitions are of a certain kind and add up to certain regular durations etc. But with the shorter duration I was using this was not the case.

And in a broader perspective: are you inspired or influenced in any way by club music, or do you feel any connection to this “scene”?

Actually yes. For me the most interesting music has always come from the club music scene. This seems especially true today. But I listen at home. I can’t be bothered going out these days [laughter].

Could you name some names?

I would rather not name names. Sorry!

So, you don’t agree when people say: “you have to actually go to the club to experience music in its context and to really get what it’s all about”?

There’s nothing important about going to a club. There are no rules about experiencing music.

It’s nice to use it as an opportunity to explore the parameters of the system you are working with. More and more it feels like that, rather than a performance. Problems are typically that sound can be not as good as one expects, and too much waiting around.

I guess I’m more confident now, so I can explore things at a more relaxed pace.

Could you tell me something about Sensate Focus? From a club music perspective, it can be seen as a commentary on house music, possibly stating its agony. And what’s with the pencils?

The pencils were made because all the music is made using the pencil tool in Digital Performer.

I like the sounds in house music, but I prefer more unfamiliar rhythms. So that’s why I made Sensate Focus.

How did you collaboration with Terre Thaemlitz begin? And what was the idea behind your project?

He’s an old friend. He was in London, so we decided to do it.

Is it possible to create and listen to music in an uncritical, non-reflective way?

I guess a cow or a baby would be able to do so, yes.