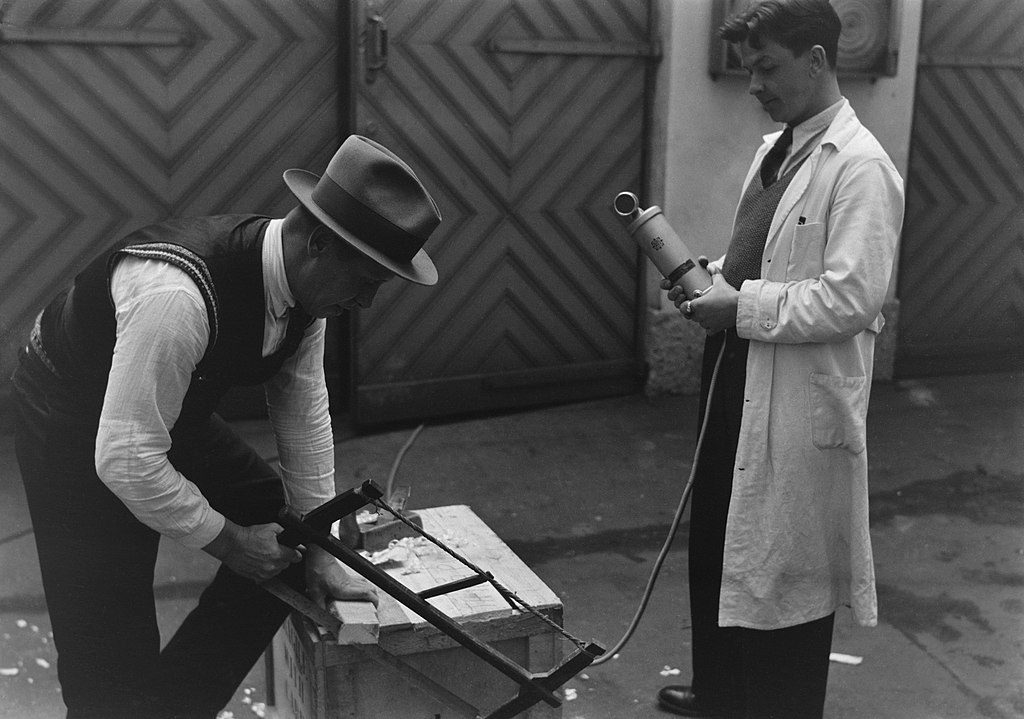 Do you remember the wet, crunchy sound of a nose being broken during one of the fights in David Fincher’s Fight Club? Sound designer Ren Klyce took a dead chicken, stuck it full of nuts, and then hit it with his fist; he combined this recording with the sounds of raw meat being pummelled in a basement. The movie’s audiosphere was built from the ground up, without using popular sound effects like breaking a foil-wrapped celery stick to imitate the sound of cracking bones. We listen to sounds like these not in the way we would to a musical composition; instead, we haptically absorb them, immersing ourselves in the fictional world. We invite you behind the scenes of the sounds we experience in horror and science fiction movies – join us in creating issue #37 of Glissando about sound design.

Sound design is the practice of designing with sound: from world-building in movies to sounds used by machines to communicate with us. Brian Eno was mostly guided by the time limit of 3 ¼ seconds when he composed the startup sound for Windows 95. The track is still not boring, despite being played more times than the most popular pop hits. Similarly, the sounds of the Xenon pinball machine designed by Suzanne Ciani in 1980 were mostly constrained by the device’s internals, as well as the player’s reaction time and arousal pattern. Sound is used for specific purposes – to enhance our enjoyment of games or convey information. Sonic information design uses the sense of hearing for data analysis because it is easier for humans to tell apart different sounds than columns of numbers. Seismic movements represented through sound were used to detect nuclear explosions. Even the current discoveries related to gravitational waves took place via auditory rather than visual representation.

We invite you to write about the everyday designs we all make, such as when we create our own soundscapes using an app that plays the sounds of a coffee shop (to stimulate productivity), of the sea (to calm down), and computer noises (to make our children go to sleep). These applications serve the same function as muzak, the music played through the PA systems of malls, elevators, and factories to create a neutral sonic background and cover up undesirable sounds.Muzak Holdings LLC, founded by George Owen Squier in the 1950s and crushed by R. Murray Schafer three decades later, was born out of the desire to program moods through sound and audio environment engineering. The assumptions of this failed project are especially worth remembering today, when experimental music is evolving towards exciting the listeners through ASMR and healing them using specific sound frequencies.

Most of the sounds which surround us were designed for us. The public audiosphere is designed to make it easier for us to move around and live in a difficult environment, as evidenced by highway noise barriers. But is masking or isolating the unpleasant sounds which surround us enough? Are sound signals at pedestrian crossings just an addition to traffic lights or are they a step towards reshaping the urban soundscape? Do car alarms, train sirens, and the sounds of critical system errors still warn us? We invite you to speculate about how redesigning virtual and haptic spaces can change society. We are particularly interested in the following areas: